The three “R”s of discontent; riots, rallies, and rebellions is not just another example behind the power of the wisdom of three.  No, it also represents the societies’ manifestations of their constant quest for the truth.  Not what each individual conceives to be the truth, rather the real truth. 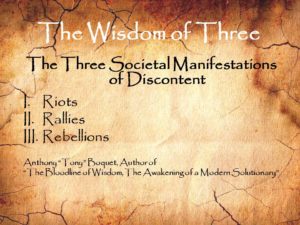 Recently the United States witnessed a very divisive national election cycle filled with rally after rally followed immediately by nationwide demonstrations both peaceful and not so peaceful.  These assemblies were promoted to and by assorted factions either in support of, opposition to, or in search of the truth.  The funny thing is that each of these groups swore that they were supporting the truth and what they believed was right, just, and true.

How can this be?

Is it possible that some of these various factions do not care about the truth but rather have their own agenda?  It has been documented that depending upon who they are addressing; whether it is their membership, their opposition, or the public at large the message they espouse can be much different allowing for a glimmer of truth to stay embedded while still championing their unique cause or stance.  Regardless if their messaging is a hundred percent true or even remotely supports the truth, it will always be portrayed as the truth because every just person wants to believe that their thoughts, words and deeds are on the side of truth.  And for there lays the problem; a truth can never be a lie and a lie can never be a truth, for both are constant.  This problem was solved almost three thousand years ago by Aristotle in the Law of Non-Contradiction yet still today we, as a people, fail to grasp the meaning of this simple law. 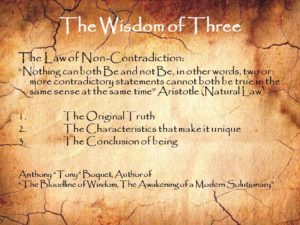 Take as an example the women’s right movement.  The single and undeniable truth is that women deserve the exact same human rights as men.  All people should be treated equally under the laws of the land.  No rational person should dispute this truth.

Now, as example, there are literally thousands of association, groups and organizations that support this truth; Planned Parenthood, Catholic Charities, National Organization for Women, just to name a few.  The above mentioned women groups cannot be more fundamentally different yet they each were founded for the betterment of women’s rights.  When a women rally is held there is likely to be women from many different organization, companies or associations in attendance all believing the above truth but their definition of rights might vary greatly.  Some of these organizations believe that it is a right of a woman to be able to have an abortion while others do not see this as a right.  Those that don’t condone abortion believe another truth; that it is not just to kill an innocent life in the absence of a crime or danger to the mother.

Does one truth over ride the other?

Another truth that always gets lost in these discussions is the fact that men and women are different.  After years of scientific and psychological research the experts all agree that male and female genders pose physical, mental and emotional differences in our species.  These truths are indisputable yet seem to not matter to some of these groups.  Even with these differences the truth remains that as a human we share the need for equality under the laws of the land.

Without a doubt, we are a unique and interesting species. Humans will always fine bad reasons for good ideas and good reasons for bad ideas.  This is the sole reason why ethically minded people as well as morally supportive organizations struggle to find common ground on ideological differences. The individuals associated with a group usually find just enough information to either agree or disagree with the cause yet they do not necessarily care or wish to dig deep enough to learn about the truth in question.

The Truth gets lost in the mix of individual’s thoughts, words and deeds. 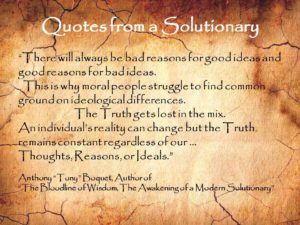 When we, as a society, can finally figure out how to accept that an individual’s reality may or may not reflect the truth and thus when false should have no weight to sway others; only then will we be able to live in world wide peace.  When we acknowledge that the Truth remains constant regardless of our individual Thoughts, Reasons, or Ideals then we will have no need for these divisive plagues of disagreement.

To learn more about the Power of Wisdom of Three contact:

Anthony “Tony” Boquet, Vice President, Education & Development at The American College of Financial Services and the author of “The Bloodline of Wisdom, The Awakening of a Modern Solutionary”