“Even Aristotle, a Greek pagan, would have agreed with the Christians on choices and / or decisions which would contradict with the natural flow of nature. He is credited with establishing the Law he called, The Natural Law: A paradigm that posits the existence of a set of laws whose content is set by nature and that therefore has validity everywhere.”

(International Encyclopedia of the Social Sciences) 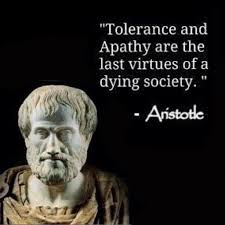 I think Aristotle and I would have been great friends because we both agree that it is nature that rules the truth and the truth can be found in all things naturally.  It is when society tolerates the opposite that problems cannot be solved.

Humans are the only creature with the mental capacity to make decisions that contradict that which is natural and when they do they are stupid enough to believe it is the true and right way of doing things.

However, it is evident that any time such decisions or choices are made it creates a multitude of additional problems for the person and all those that are effected by the choice or decision.  Problems are tied to the Wisdom of Three in the same manner as their solutions are in that there are always three stakeholders to every problem or solution.  The person or entity creating the issue, the person, persons, or entity directly affected by the problem / solution, and those indirectly impacted by the outcomes.

Remarkably, continuing to follow the path of the Power of the Wisdom of Three, there are three schools of Natural Law theory: Divine Natural Law, Secular Natural Law, and Historical Natural Law.

It is clear that Aristotle was drawn to the Divine Natural Law for the same reason that I am.  Though we worship a different God, this law reveals answers to life’s many questions and provides us with the truthful answers we can use to make wise decisions.  I believe and gravitate to the Divine Natural Law as the president because I follow the belief that God made all things and all people, even those who do not know or believe in any God. Upon this creation He bestowed His “blueprint” in every animal of how they are to act and respond to the world’s problems. We do not need to be taught these “Natural Laws”; they are embedded in our genes.  We just need to be open to understanding their importance in the same way an animal naturally responds to their surroundings.  The lack of knowledge or belief in religious or spiritual ideals does not lessen the person’s natural ability to convey these truths of our nature.  Since all truth predate mankind and is factual in nature, these facts exist; by their very existence God must have created it regardless as to whom it is professed by. Thus, all truth is God’s truth.

In Secular Natural Law we rely on the physical, biological, and behavioral laws of nature as understood by human reason. As with all things human, their reason may be flawed. It was John Locke, the father of this theory, who wrote, “Human beings live according to three principles—liberty, equality, and self-preservation. Because no government exists in the state of nature to offer police protection or regulate the distribution of goods and benefits, each individual has a right to self-preservation that he or she may exercise on equal footing with everyone else.” With his three principles he too espoused to the Wisdom of Three.

The Free Legal Dictionary says it best.  “All three schools of natural law have influenced the development of U.S. law from colonial to modern times. In many ways the creation and ratification of the Constitution replaced Scripture and religion as the ultimate source of law in the United States.  The federal Constitution makes the people the fundamental foundation of authority in the U.S. system of government. Many of the Framers characterized the Constitution as containing “sacred and inviolate” truths.  In the same vein, Thomas Paine described the Constitution as a “political Bible.”

In 1728 many Americans understood that the Historical Natural Law, which become known as Common Law, encompassed the Law of Nature, the Law of Reason, and the Revealed Law of God, which are equally binding at all times, in all places, and to all persons. Between 1776 and 1784, 11 of the original 13 states made some allowance for the adoption of the English common law. One federal court said that the Constitution “did not create any new rights to life, liberty or due process. These rights had existed for Englishmen since Magna Charta. The Declaration of Independence … merely declared and established these rights for the American colonies” Thus, natural law in the United States may be best understood as the integration of history, secular reason, and divine inspiration.”  I fully agree with that federal court interpretation of the Constitution because these rights existed long before the Magna Charta.

So, the question remains, “Why do these laws or truths matter?”

As science continues to push the boundaries of human understanding as never before we will be asked to believe some knowledge that contradict the truths held by Natural Law.  This knowledge will then be used by people to make future decisions.  Regardless of your spiritual beliefs, this manipulation of the truth should bother you.

As an example, it will always be natural for a man’s sperm and the egg of a woman to come together to birth a child.  Naturally, two men cannot do it, two women cannot do it, but soon scientist will be able to manipulate nature so that two or more people of the same sex and one of the other will be used to generate life.  Soon we will be able to pick the child’s sex, hair color, eye color, and even their intellect. These changes will prompt the need for society to make “common laws” that condone “unnatural laws” for the sole purpose of providing credence to our unnatural believable lies, our desirable falsehoods and partial fact filled choices.  But in the end, the world will not have it.  It is impossible for anyone to manipulate lies; making them into truths.  Nature never works like that.

Where will it stop?

Will we ever, once more, unify as a society around the Natural Laws of truth; putting aside the unnatural laws of man’s runaway and out of control free will?

“Choosing right from wrong can be difficult but it should not be impossible. As to a decision that applies to a Man-Made or Common Law; knowledge of the law can be tricky.  However, Natural Law is bred into the human condition and has been reinforced by society throughout the centuries. When Common Law mirrors Natural Law the choice becomes much clearer.  Yet, amazingly, some people still go out of their way to oppose the obvious; then wonder why their lives are filled with self-inflicted problems.”